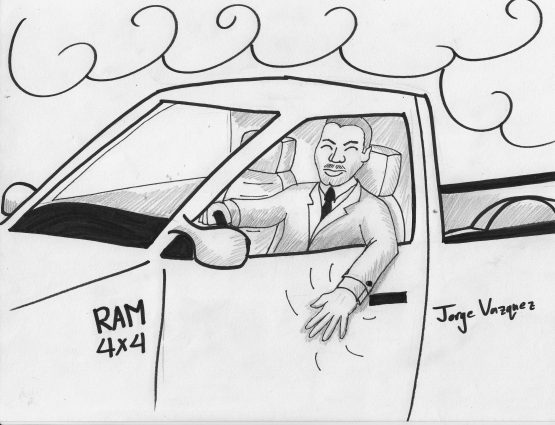 Respected historical figures should be off the table when it comes to advertising.

As one of the most watched live televised events, the Super Bowl even intrigues viewers between the action with clever ads and             long-awaited movie trailers.

One of this year’s commercials, however, caused quite a bit of controversy.

The ad in question featured a voice-over of Martin Luther King ,Jr.’s speech accompanied by images such as a soldier embracing his child and a dog being rescued from the rubble of a collapsed building.

Also included in the commercial was the actual focus point: glimpses of the new Dodge Ram truck.

It’s understandable why King’s speech would be used for commercials.

His words evoke powerful reactions and are a great example of using pathos, the appeal of emotions, in advertising. Using his words, however, conflicts with his philosophy.

The advertisement team for Dodge really screwed up here by misunderstanding the importance of his words and using them for something that he would clearly stand against.

The ad received backlash on social media immediately, which pointed out the moral dilemma of using such a revered figure.

Twitter users voiced their issues with the ad’s use of his speech.

Of all the people who voiced their concerns over the ad, the most important certainly was that of Bernice King, King’s daughter.

She posted on Twitter using The King Center’s page, which is dedicated to King’s teachings of nonviolence.

Whoever is in charge of the marketing department should be fired over his or her mistake.

King is one of the greatest Americans, if not humans, to ever have lived, and using his image lessens what he actually stood for.

Given the amount of backlash, hopefully corporations will shy away from repeating the same mistake.