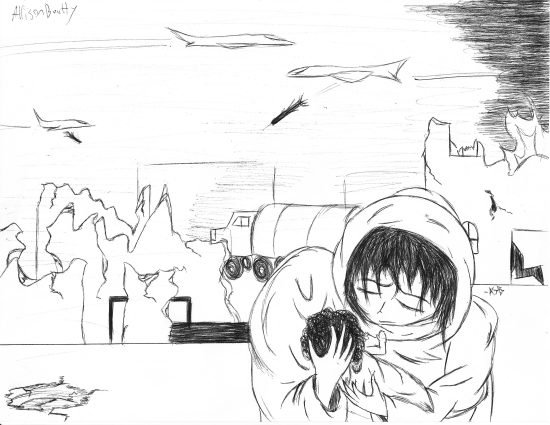 Recent airstrikes against the Syrian government will not lead to a ceasefire, but will increase civilian casualties in the war-torn region.

Millions of Syrians have fled the country or lost their homes.

Hundreds of thousands of civilians have died in the crossfire between al-Assad’s government forces, rebel groups, ISIS and the ethnic Kurds fighting for sovereignty.

Instead of intervening peacefully and establishing a ceasefire between all conflicting sides, major world powers such as Russia, Iran, United States, Saudi Arabia and other Arab nations are continuing to fund the conflicting sides.

With all its money and endless amount of resources, the United States spent around a billion dollars to launch airstrikes against ISIS.

Although some airstrikes struck its intended targets, thousands of civilians, many of them women and children, lost their lives .

Last week the United Kingdom, France and the U.S. fired airstrikes against the Syrian government in retaliation of the governments chemical attack on its own people that left 80 people dead.

This isn’t the first time Al-Assad’s administration is suspected of launching chemical attacks on its own people.

The last chemical attack occurred in the summer of 2013 with 1300 dead, according to cnn.com.

Backed by Russia and Iran, Al-Assad is committed to stay in power while rebel group factions backed by the U.S. and some Arab nations, like Jordan and Saudi Arabia, unite to dethrone his presidency.

The Kurdish people, also supplied and trained by American troops, continue to fight off and reclaim territory held by ISIS.

As these multiple conflicts continue to develop and evolve into a proxy war between the U.S. and Russia, millions of Syrians will continue to die and seek refuge in other parts of the war.

The Syrian Civil War has lead to a Syrian refugee crisis in nations across Europe, the Middle East and U.S.

Many of these nations are eager to arm the sides in the conflicts but hesitate to allow refugees from settling in their country.

President Trump is seeking to increase airstrikes against Syria, but also is eager to establish a travel ban that prevents Syrian people from settling in the U.S. and abolishing Temporary Protected Status for a list of countries that include Syria.

It’s impossible to predict when the Syrian conflict will end or how long it will take for the country to rebuild the buildings, classrooms and hospitals caught in the airstrikes.

Many humanitarian organizations have trouble accessing areas caught in the warzone and providing aid to those in need.

The recent airstrikes will only make things worse as opposing sides seek to retaliate  with innocent civilians stuck in the middle of this conflict.

The U.S. shouldn’t continue to bomb Syria if it’s not going to open its borders to the people whose homes were destroyed by American bombs.

To assist those affected by the civil war, people can donate to Doctors Without Borders, a non-profit organization providing medical aid to the survivors of the bloody conflict at doctorswithoutborders.org