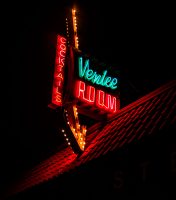 Despite rumors of closure, The Venice Room in Monterey Park will continue to operate and provide an Italian-style bar and restaurant experience.

The Lombardo family, who started the restaurant more than 60 years ago, will no longer be in charge of the restaurant’s dealings.

Sam Lombardo, son of Joseph and Mary Lombardo however, wants the public to know the new management at The Venice Room want to keep things going the same way.

“The new owners are enthusiastic about keeping The Venice Room the way it has always been. We’ve been here more than 60 years. In that 60 year period of time, we’ve had relatives run the place for us. So, no. It will be open and it will be the same.” said Lombardo.

The transition from the Lombardo family over to the group of investors, Da Crunch, Inc, finalized on Oct. 11.
The new manager at The Venice Room, Raymond Rivera, wanted to make sure people understood that he and the group were committed to keeping the restaurant the way he remembers it.

The Venice Room was not one of Rivera’s usual hangouts.

He said he stopped in at times with friends, and that he understood the restaurant’s charm and uniqueness.
“From those first couple of times, I mean, it was definitely a unique place; some place you would have to come back to every now and then, just for a good ol’ beer and steak,” said Rivera.

Rivera wants locals to be assured that although the people running The Venice Room aren’t the Lombardos, the investors placed him there to make sure things stay the same.

“There’s been people questioning that The Venice Room is too good to stay the same,” said Rivera.
He said that whenever there is a change behind the scenes, people assume that something always changes, be it prices, atmosphere, or even the name itself.

But, he said that that is not the plan here. “You know, for the most part, the culture, the crowd, you know the food, everything that’s here to stay we plan on keeping it the same,” said Rivera.

Yet some customers have reservations about the new faces at The Venice Room.

Having just found the restaurant, Arenas was taken aback upon hearing of the impending changes.

“As a recent patron, I am terrified that the change in ownership will result in higher prices, the disappearance of the cook-your-own-steak experience, or changes to the unique decor,” said Arenas.

But others, like Cesar Sanchez, a frequent customer over the years, aren’t too concerned.
Having first found The Venice Room 20 years ago after a long day at work, he said that despite the changes in management over the years the restaurant has always remained the same.

Sanchez said that the restaurant is, “a nice place. Like a ‘Cheers’ place. Very homely place. Never seen any problems.”

Making sure things stay on course, Rivera came to The Venice Room more than a month ago to brush up on what it would take to run the local spot.

He shadowed Lombardo in his day to day, trying to pick up the way Lombardo ran the restaurant, in an effort to provide a smooth transition.

“It’s a different bar and grill than any other place out there. I’ve been to many other bars before, and none like this where you look over your shoulder and it’s like everyone knows each other. Everyone is close, everyone is like family,” said Rivera.

Lombardo said that family is the very reason the transition had to occur.

Lombardo said that his sons Joe and Justin, and his nephews Daniel and Michael all had worked at the restaurant over the years, but that their lives took them in different directions.

Lombardo added that he is now close to his 70th birthday and after working at The Venice Room for 30 years, he decided he really wanted to spend some time with his grandkids.

The Lombardo’s have local properties and businesses in the area, making it easy for them to keep tabs on the goings at The Venice Room.

“It’s not like we’re leaving the area. We’re just leaving the daily responsibility of The Venice Room, but we’ll always have a watchful eye on it,” said Lombardo.