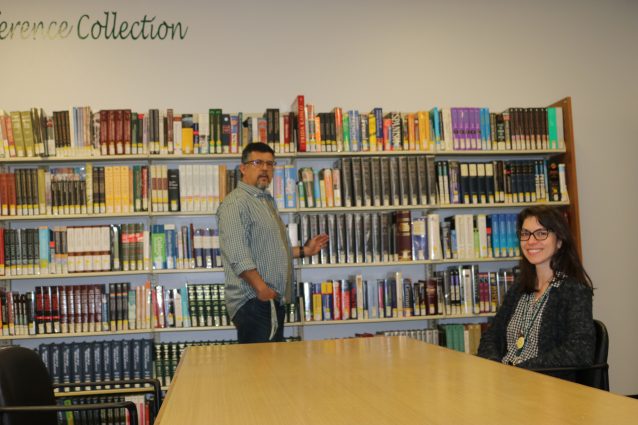 East Los Angeles College library technician Jose Mungaray has spent years in the classroom and library helping students at both the main and satellite campus.

For close to a decade and a half, Mongaray has spent his days working at the South Gate campus as both a library technician and as a professor of Chicano studies. His road was a bit winding, but it has lead to a position he cares deeply for, as well as respect from his students and coworkers.

Mungaray was born in Douglas, Arizona. His family moved to Mexico after his birth for three years, and then returned to the United States in 1969.

The family took up residence in Southern California and settled in Maywood. He went to school in Maywood, then Downey, even having a stint at ELAC before getting his master’s in Chicano Studies at California State University Los Angeles.

During his youth, he worked at the Maywood library. “I worked in the library even when I wasn’t supposed to. I started working there when I was 15. You’re supposed to be 16 for the county, but I had a really good mentor who allowed me to work a few months before that,” said Mungaray.

He then moved to the Huntington Park library, and met Evelyn Escatiola, at the time a library manager. Escatiola is now the Dean of Academic Affairs at the South Gate campus.

When a fellow worker told him of an opportunity, he took a job working at West Los Angeles College. This led to him getting a job as a library technician which he used when he applied at Los Angeles Harbor College to work there. Finally, Mungaray said he made his way back to ELAC in early the 2000s.

Mungaray said he worked at the main campus library for a time,  before any renovations had been made. Mungaray said that working at ELAC was a bit stressful because the main campus was understaffed. He then moved to the South Gate campus and a lot of the stress was lifted.

“It’s been easy because I’ve enjoyed working here, the people I work with, the environment, the students, the whole academic setting. Once I got my degree, I started teaching in 2005. It kind of made it more, not comfortable. I do enjoy being here,” said Mungaray. He got his master’s degree during the time he worked at the ELAC library.

Two specific things pushed him into going to Chicano studies while at CSULA. The first was reading “Bless Me Ultima” a coming of age novel by Rudolfo Anaya during a Chicano studies course. The second was an incident where he was refused service at a local Maywood restaurant when he was in his early 20s. Mongaray said that at the time Maywood was still a very Anglo area and that during his youth he was shielded from much of the discrimination going on.

These two events really spurred him forward into Chicano studies. Getting his master’s degree allowed him to start teaching, first at Los Angeles Mission College in the fall of 2005.

Mungaray said that as soon as he got his degree, he had very little time to get used to being a teacher.  Once he did his first semester there, he transferred over to ELAC, where he was still working as a library technician and started teach classes.

He was fully at ELAC, where he had started his college experience, something his two children Luis and Gabriela Mungaray have, and currently carry on today.

While Mungaray worked at the South Gate campus library, he began to notice that neither the space allocated for the library nor the resources there were sufficient to meet the needs of the students.

Current chairperson of the Library Faculty, Unjoo Lee, said that Mungaray was always thinking about the students at the South Gate campus.

“In 2005, Mr. Mungaray relocated his assignment to the South Gate Educational Center. He has been a solo library technician who assists students with directions and general library information, explaining library policy and procedures, locating, retrieving, charging, renewing, and receiving library materials, and library equipment,” said Lee.

She said that Mungaray not only helps the students academically, but that his notice of lacking resources and planning also helped make the library what it is today.

“Actually, it took a long time. It took almost 10 years,” said Mungaray about the improvements to the library in the South Gate campus.

Before the campus became accredited, the main problems were cramped space, few hours and the lack of resources. Mungaray said that when accreditation was in sight, a lot started to change.

During the 2015 school session, Mungaray said that the library made the move from the smaller room 124 to the current spot in room 215. This increased the size of the library, hours were added and more resources were given to the students.

Mungaray works daily alongside other librarians to help the students use the library resources. Natasha Alvarez, outreach and instructional librarian, said that working alongside Mungaray, she has seen that from him,  it’s all about getting support.

“He is very in tune with the academic needs and support needs of the students. He knows everyone on campus,” said Alvarez. “Mr. Mungaray has been a hidden gem at East Los Angeles College South Gate Educational Center Library. Not only because of his veteran experiences, but also because his dedication to provide students access to the academic resources,” said Chairperson Lee. Mungaray pointed out that these resources were important.

The South Gate campus is planning a big move to a new building within the next couple of years.

Mungaray said he wants students to understand that the library is a serious place where students can come and learn, not a place for goofing off.

Mungaray said that succeeding in this world and preparing for what was coming was key. “If you want learn how to succeed, talk to me,” Mungaray said.