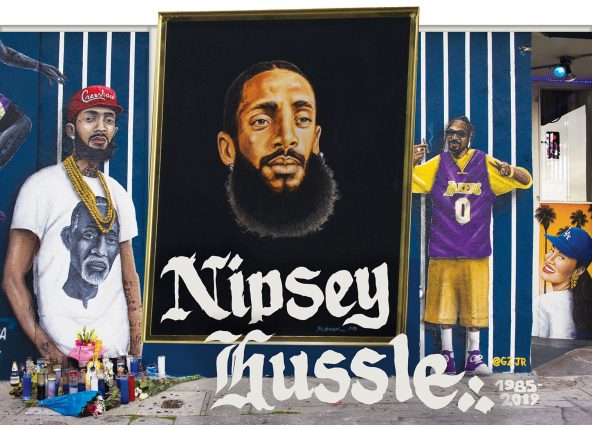 Thousands of fans are mourning the death of rapper and philanthropist Nipsey Hussle.

Hussle was shot to death on March 31 at age 33 outside of his clothing store in Hyde Park from where he worked to revitalize the neighborhood. Prosecutors charged 29-year-old Eric Ronald Holder Jr. with murder, two counts of attempted murder and possession of a firearm by a felon. His attorney entered a not guilty plea on April 4, and bail was set at $5-million.

Hussle, born as Ermias Joseph Asghedom, was a member of the Rollin 60s Neighborhood Crips gang from a young age, but transitioned into a legitimate businessman and successful hip-hop artist who helped others looking for an identity outside of being a gang member.

Hussle was known for working with artists from other gangs like Jay Rock, a Bounty Hunter Blood and YG, a Westside Tree-Top Piru Blood. He also worked with police as a mediator to curb gang violence.

“We (@LAPDChiefMoore and I) were meeting at the request of @NipseyHussle with him and @rocnation tomorrow at 4 p.m. to talk about ways he could help stop gang violence and help us help kids. I’m so very sad,” Steve Soboroff, President of the Los Angeles Board of Police Commissioners, wrote in a tweet.

Hussle inspired his former manager Eugene Henley, better known as Big U, to carry on the late rapper’s legacy and helped organize a meeting with members of almost every gang in Los Angeles. Hundreds of gang members from rival gangs attended a vigil April 5 where leaders agreed to a peace treaty in the slain rapper’s honor.

This new peace treaty comes 27 years after the Watts truce, a peace agreement among rival gangs in response to beating of Rodney King by police.

“Here’s a man who was destructive in his community who evolved, and now he’s building in his community,” Minister Tony Muhammad, western regional representative of the Nation of Islam said.  “We lost a giant in one sense, but because he was loved by so many, his energy has now jumped into them.”

He bought underprivileged children shoes, repaved black tops at local grade schools like 59th Street Elementary, and hired felons struggling to reintegrate into society at his several businesses. The Marathon Clothing store where he was killed was at the center of his efforts, and his constant presence with little to no security earned him a reputation as a man of the people.

“We at Los Angeles Unified are deeply saddened by the untimely death of rapper and philanthropist Nipsey Hussle,” A Los Angeles Unified School District representative said via email. “He did a great deal to support our school communities and inspire our students, including spearheading a recent partnership with sportswear company Puma to refurbish the basketball court and present a $10,000 donation to 59th Street Elementary School. Our sincere condolences to the family members, friends and millions of adoring fans grieving the loss of the late artist.”

He started his music career selling mixtapes in the parking lot of the shopping center he would come to own with help from his older brother Samuel Bellamy, late member of his team Stephen “Fatts” Donelson, and mentor Herman Douglas. Before gaining notoriety, he also sold t-shirts and socks to fund is artistic aspirations.

“I feel like I lost a son. No one believed in cuz except us and himself. If you don’t believe in yourself then no one will,” said Douglas. “Believe in yourself. That’s the only way to make it.”

Hussle openly talked about his life as a gang member during interviews.

He talked on Vlad TV about how joining the 60s was largely a financial decision to fund his music, and how finding an identity outside of being a gang member, is the greatest obstacle gang members face.

James Diego Vigil said the main reason youth in minority neighborhoods join gangs is extreme poverty and an inability to integrate into school. Vigil is a professor emeritus who taught criminology at schools including the University of Southern California, University of California, Irvine and Harvard’s Graduate School of Education as a visiting professor. His research and scholarly work focused  on gang culture and street youth.

Vigil said how truces and cease fires among gangs have been agreed upon before, but never last because of a lack of social economic change.

“They grow up on the streets. In other words, they become street socialized, and growing up on the streets you learn from the experts on the streets,” Vigil said. “We could go back generations and look at a street population that goes back 20-30 years, and they’ve created their own culture. It’s a culture of their place, and it has a name, the name of the barrio, the gang.”

Vigil said rivalries going back decades became institutionalized in the sub-culture, something Hussle worked against.

“Nip didn’t just send money to the hood. He came,” Muhammad said. “He was here every day showing the homies the way out, giving them jobs. He brought wholistic food here so the homies could stop eating bad food. I mean the man was thinking in the future. The best way to show respect to Nipsey is to become like Nipsey.”