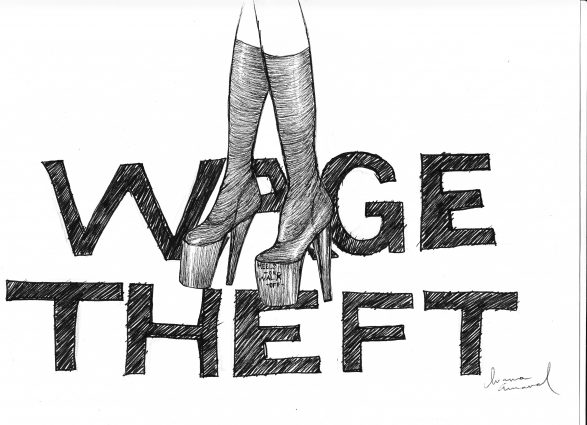 Exotic dancers from Los Angeles gather in Hollywood to voice their opposition to the California Supreme Court ruling changing their status from independent contractors to employees.

This decision is being opposed by both dancers and club owners, causing protests and lawsuits to be filed.

This should not be a battle against the ruling. It should be a fight against their employers. Soldiers of Pole is an exotic dancers union responsible for organizing the protest.

The change to their employment title is just one of their complaints. They also demand fair wages and a safe work environment. The state court ruled in Dynamex Operations West, Inc. v. Superior Court of Los Angeles in April 2018 to limit the of classification of independent contractors.

The ruling puts exotic dancers, among other occupations like delivery drivers, as regular employees. This change would have these people paying for income tax, social security taxes and health insurance. Independent contractors, however, are devoid of those until they have to report their taxes at the end of the year.

For years, exotic dancers have had freedom in their line of work. They can go to work when they want to, allowed to be picky with their customers and keep the tips they get from customers.

With the new ruling, they would be placed in the club’s payroll and be required to give a percentage of their earnings to the club.

“We have a right to force management to come to the table, and abolish stage fees, and wage theft, and racist business practices, and make a safe and sane work environment for dancers,” Antonia Crane said, according to Los Angeles Magazine. She is one of the organization leaders.

Strip clubs charge their dancers house fees before or after they start their shifts. Dancers claim that the club owners have been increasing house fees in addition to taking a large sum of their tip earnings.

“They are literally stealing from us,” Domino Rey, a member of the Soldiers of Pole, posted on Instagram @dominoinla.

The change to regular employees, however, have some benefits for the dancers. They now have legal protection that they didn’t as independent contractors.

This is one of the reasons why they can file so many lawsuits against their employers for lowering their wages in the first place.This is a battle between employees and their employers, not against the court ruling.

Due to the changes club owners have to provide hourly income, offer job benefits and overtime pay.It’s costing them a lot more money than before.

Dancers are saying they’re purposely cutting their wages to make up for the loss. BSC, a company that manages most strip clubs in San Francisco, revealed to the SF Examiner that it’s costing them several million dollars a year.

Of course this would be the case, because club owners have been saving millions of dollars not having to pay taxes by misclassifying their employees as independent contractors.

The Government Accountability Office stated in a 2009 report that the misclassification cost $2.72 billion in federal revenues in 2006.

Without the Dynamex decision, dancers would continue to be misclassified, allowing for situations like wage theft to not have legal repercussions.

Exotic dancing is a dangerous line of work. They are exposed to sexual harassment, but as they are now classified as regular employees, they now have legal recourse as an option against it.

Having this new status also grants them overtime pay and health benefits.

One of the main concerns for dancers is being unable to be picky with their customers, but that goes for all types of jobs.

Not everyone in the workplace is comfortable with dealing with difficult customers.

They are forced out of their comfort zone and are required to do what they don’t want to.

It’s one of the downsides of a job. It’s in the hands of the employers to regulate conflicts in the workplace.

While it is admirable that exotic dancers are unionizing and fighting for their rights, the Dynamex decision goes beyond their line of work but also to other workers that have been victimized by the misclassification.