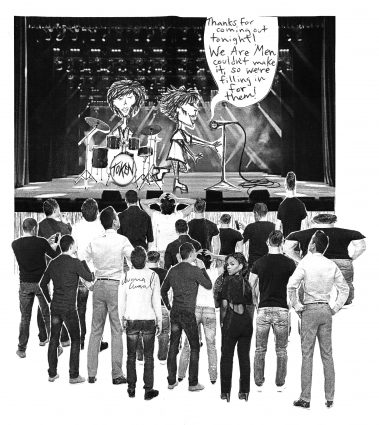 Women have been deeply intertwined with rock music since its beginning, but it still feels like there isn’t enough female representation in the genre today.

At a glance, it may look like the most popular rock artists are men, and that’s because it’s true. There isn’t enough being done to promote  music from female rock artists.

It’s not like there aren’t any women making rock music, because there are plenty out there.

Bands like Wolf Alice, The Beths, Alvvays, Shannon and the Clams, Beach House and Cherry Glazerr are all fronted by women.

Then there are the rarer all-female bands like Camp Cope, The Coathangers, L.A. WITCH, Body Type, Electrelane, The Organ, Trash Kit, La Luz and Pinky Pinky.

Solo artists like Melody Prochet, Courtney Barnett, Jenny O., Weyes Blood, Molly Burch, Lindsey Jordan of Snail Mail, Cate Le Bon, Jackie Cohen and St. Vincent, who is renowned for her unique and prolific guitar skills, have also not reached the popularity they would have if their music was promoted more.

These artists are making some of the most interesting and exciting music in rock, yet they are still being overlooked because of the music industry’s preference toward men.

The lack of promotion is clear when looking under the “New releases” of Spotify’s Rock section. Currently there are no immediate results for new records by female artists. Clicking on the “see more” option  yields few results, highlighting the lack of equality.

Camp Cope’s song “The Opener” offers insight into what it’s like being a female band in today’s musical landscape.

Instead, promoting women’s music at the same level as men would be much more effective.

Some are doing their part like Seattle-based record label, Suicide Squeeze Records. More than half of their signed artists are bands that consist of only or mostly women.

Last year, a study by Fender Musical Instruments Corporation, one of the major guitar manufacturers in the world, found that 50 percent of all new guitar players in the United States and United Kingdom were women.

These findings led Fender to pursue collaborations with the female-fronted band Bully and the all-female band Warpaint.

The female market for traditional rock instruments is there. Rock music has come too far to keep thinking of rock as a male genre of music. It’s not.

But, the music industry sticks to what it knows will sell which translates to male artists, so that’s what the public is exposed to more often. The music industry ends up leaving people to seek out female rock artists on their own.