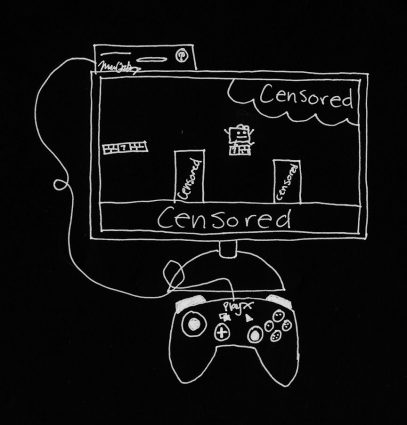 The making of a video game is just another art form like any other kind of entertainment. Some companies, like Sony, have decided to censor certain aspects of games that seem unnecessary.

Sony is a huge company, and like any other big company, they want to make the games on their platform the most accessible and marketable as possible. This is in contrast to Sony from a decade ago. Sony was once known for being one of the few companies who didn’t mind the more explicit content.

Some people may use the argument that extreme gore, lewd or sexual content has no place in gaming because it’s for kids, but this isn’t true at all. According to a 2018 industry facts research report done by the Entertainment Software Association, the average gamer is 34 years old and 72 percent of all gamers are over the age of 18.

This means that trying to brush off video games as being solely for kids would be statistically incorrect. This information is important because it shows that censorship to protect younger gamers  wouldn’t make sense. They are just over a quarter of the audience.

Another reason why censorship isn’t right is because there is already a rating system on the box art of physical copies of video games. Big retail stores like Best Buy, Target and Walmart make sure that mature-rated games are only sold to anyone with adult supervision. As for digital video games, it is usually one of the first details listed before the purchase of the game.

Digital purchases are easy to manage though. If parents are doing their job properly, they can set age restrictions which will not allow their children to buy video games at all. Also if they make sure to remove their credit card information from their child’s gaming device after each purchase, that’ll keep any unauthorized purchases from happening.

The rating system was set in place to keep people from complaining about mature titles falling into younger players hands after games like Mortal Kombat, that had violence and gore, were released and became a mainstream success. This means that companies really have no right to change the art direction or creative style of a video game.

Sony has made small comments to explain its decision to censor. They have said  that it’s to help make sure that kids develop correctly and to not offend certain people. But players should have the right to avoid the content if they choose to, not have companies choose for them.

If Sony continues to censor their gaming experiences to the extent that they have been, it may discourage developers from making their games exclusive to their system.