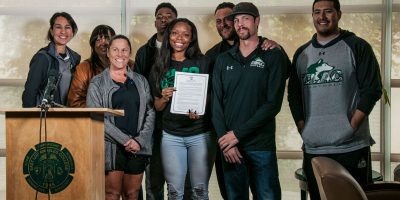 Huskies’ own Antoinette “Toni” Harris announced at a press conference yesterday that she will be playing football for the Central Methodist University Eagles this June. 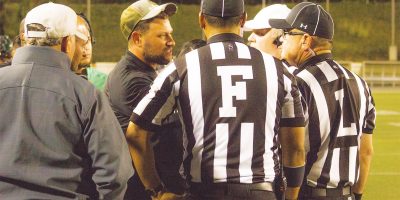 The officiating and Southwestern special teams unit put the football team out of contention for a win during the 38-17 loss at Weingart Stadium.

BY CRISTAL GOMEZ Huskies end 2017 football season on a high note winning on a five-game winning streak with a 7-3 record. Going into his second year as ELAC Head Coach, Bobby Godinez lead the team to the Patriotic Bowl. Coach Godinez replaced ex-head coach Eric Marty after having a total of eight losses. To start off the season against Orange Coast, they won 31-22. A week after the first…

By Joe Dargan The Huskies put together a defensive masterpiece on the road, shutting out Glendale College 31-0 on Saturday. Coming from a four-game winning streak, East Los Angeles College began with a steady ground attack. Sophomore running back Toure Wallace ran for 30 yards on the first two plays of the game. Freshman quarterback Philip Tran kept the football for a two-yard run and then handed it off to…

By Christina Rodriguez Football’s sophomore tight end Ceejhay French-Love signed this off season with Arizona State University for Fall 2017. “Blessed, I feel blessed. I started to play football when I was 9 years old. Football is my life, it’s what I do, it’s what I love,” said French-Love. Verbally committed to ASU in February, French-Love officially signed with the Sun Devils while on his visit to Tempe, Arizona. The…

By Dan Gudino East Los Angeles College football and the Los Angeles Police Department’s football team, the Centurions have paired up to host three games this spring at Weingart Stadium. The contributions from the game will go to the Blind Children’s Center as part of the National Public Safety Football League. During spring, football is non-contact, practices usually consists of weight training and footwork drills. It’s a classroom setting for…

By Dan Gudino The East Los Angeles College football team capped off the 2016 season with a dominant performance in the Patriotic Bowl, at College of the Desert, winning 63-37 on Saturday. Family members, fans, and school administration gathered at midfield with players to hoist its first bowl victory trophy since 2011. “We believed in him (ELAC Head Coach Bobby Godinez) 100 percent of the time, the whole entire time, we…

By Dan Gudino Football head coach Bobby Godinez was showered with the ceremonial Gatorade bucket after his team won the American Metro Conference championship, defeating Pasadena City College 63-17, Saturday night at Weingart Stadium. “It feels awesome. It’s a tribute to the players, (coaching) staff, to (athletic director) Al Cone, to everybody who was a part of this. It’s an awesome feeling,” East Los Angeles College Head Coach Godinez said….

By Dan Gudino  The football team’s bye-week came at the perfect time to heal injuries and prepare itself for this Saturday’s clash against West Los Angeles College for the American Metro Conference title. Since the scrimmage game in late August, it’s been eight straight weeks of ups and downs. East Los Angeles College finds itself in unfamiliar territory with a winning record (5-2) and its destiny in its own hands….

By Dan Gudino The football team takes over first place in the American Metro Conference with a 56-22 blowout victory on the road last Saturday against El Camino College-Compton Center. East Los Angeles College, now 4-2 in the season, knew first place was at stake. Pasadena City College lost to West Los Angeles College earlier in the day, giving the Huskies the opportunity to capture first place for the first time…