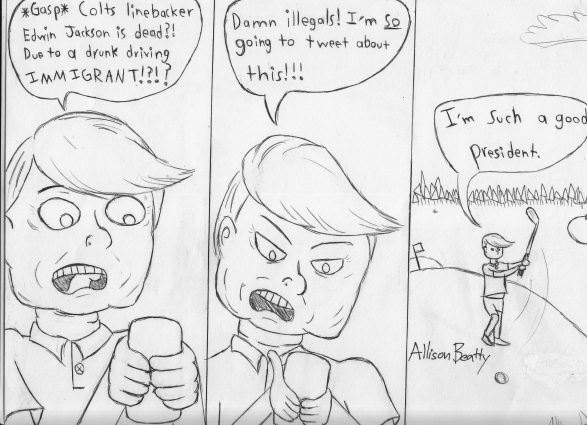 People should not generalize that all immigrants are criminals because of one case out of thousands.

Instead, we need to make the country safe for everyone living in the United States whether they are documented or not.

President Trump tweeted  Feb. 6 that it is “disgraceful that a person illegally in our country killed @Colts linebacker Edwin Jackson. This is just one of many such preventable tragedies.”

President Trump tweeted against immigration before giving his condolences to the families of those  killed in the accident.

A CNN article, said that Orrego-Savala had been deported in 2007 and 2009. This is the third time he could potentially be deported.

The issue is not whether he is a criminal or not, because he clearly is.

The issue is the way Trump layed out the situation, blaming the accident on the status of an immigrant.

This is like comparing apple to oranges. They are two different subjects.

The Center for Disease Control and Prevention said that “every day, 28 people in the United States die in motor vehicle crashes that involve an alcohol-impaired driver.”

In Orrego-Savala’s situation, he was a drunk driver who happened to be an immigrant. If he is one of those people, that means the other 20 people involved in alcohol-impaired accidents are American citizens.

If the driver was an American citizen, we would not be having this political debate.

It would most likely be the other way around. An immigrant is more likely to want to obey the law to reduce the chances of being deported.

This is an unusual situation that just happened to involve an undocumented person.

Truth is, Orrego-Savala is a criminal and justice has to be served; but the topic of his immigration status playing a role in the accident is not related at all. Making this statement was unnecessary on the president’s behalf.

The Insurance Information Institute said that in the U.S., 10,497 people died in alcohol-impaired crashes in 2016.

If we focus on this one case, the other 10,000 cases that happen annual are left to vanish.

Although Orrego-Savala’s case does bring debate, it brings the wrong debate.

Just because they are immigrants does not mean that they deserve worse treatment and no safety. Immigrants are as much, if not less, of a danger as any American citizen. Safety for all should be the immediate the debate.