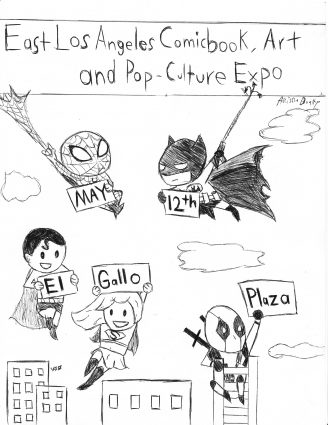 The East Los Angeles Comicbook, Art and Pop-Culture Expo is swinging back into action May 12.

Formerly known as the East LA Comic Con, the name changed after the events of the San Diego/Salt Lake City lawsuit in December, which was fueled over the copyright claim of the term “comic con” by San Diego.

Mellini stated in a press release that he hopes the new name will better convey what the event will offer guests.

“We might have a cosplay contest,” said Jonathan R. Diaz, ELAC alumnus and recreation assistant. “Last year was our first year and we had it mostly online. People submitted pictures of themselves to our judges. We don’t really have a stage for it set up yet, so we’re just going to wait and see what we do as we develop more information.”

Panels and events for the expo are still in development. Mellini does plan to have previous artists and vendors from last year’s event appear again. “It’s all still in planning. We have a line of self-publishers, comic studios and creators. We predict that we’ll have a lot of artists,” Mellini said.

Last year’s turnout for guests was so large that the plaza filled close to over maximum capacity, leaving the area tightly packed. Preparations have been made this year to accommodate more guests.

“We estimated about 3,000 people that showed up last year. To have that kind of support from the community was amazing,” Diaz said. “One of the problems that was mentioned last year was a lack of space. We actually had a good amount of space, but we just had so many people.”

An outdoor area with canopies has been added to this year’s venue for additional space. It will be two doors down from the venue and provide room for vendors.

Mellini hopes that this event will draw in as much attention as it did last year and provide inspiration for up-and-coming artists in the community.

“The event last year showed us what the area, especially the surrounding community, was like. They really embraced it, they really wanted something like this. We knew that there was a fanbase in the area, but we didn’t realize how big it was,” Mellini said.

“And ever since last year’s show, people were asking me, ‘When’s the next one, when’s the next one?’ We’ve been trying to make that happen and improve it as much as we can. We’re 50 percent bigger than we were last year since we added some space.”

For more information on the event and how to apply as a vendor, visit www.eastlacomiccon.com.