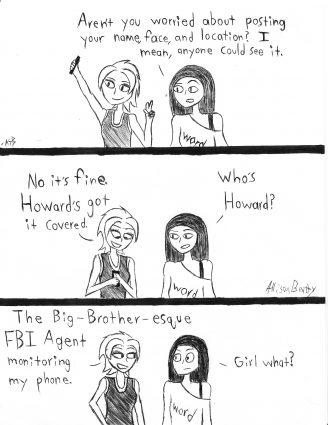 Many people are taking privacy for granted and are willingly giving away their personal information for the whole world to see without considering the consequences.

Not only does the lack of privacy make it easier for someone to track another person, but the latest fad of having everyone know what you are constantly doing used to be something that horror and science fiction stories used to be based on.

The novel “1984” by author George Orwell, for instance, is a great example of  how dangerous it is to let our rights to privacy and freedom be slowly limited to eventually becoming nonexistent.

The novel takes place in a dystopian world where the public is a victim to a perpetual war, omnipresent government surveillance and public manipulation.

Although the novel was written over half a century ago, its concept on government tyranny and the obedience of individuals where “Big Brother,” or in our case the National Security Agency, has the power to listen and observe anybody at any time is still  relevant.

Nowadays children, teenagers and adults are carrying their phones with them at all times and using them to show their friends, family, co-workers, classmates and strangers every single detail about their lives.

Millions of individuals  use social media for various reasons whether it be for networking, business related purposes or for entertainment. The trend and fixation of letting people know everything about oneself may be more harmful than one might consider it to be.

Even when people share a photo of themselves with their family and friends at a birthday party in their homes, and have the location on in their device, they have  let the world know who they are related to, who they are close with, where they live and what everybody looks like all within the span of a minute.

It seems like the only relevant time to discuss the level of transparency on people’s lives is when personal and private photos are leaked from celebrities or when emails from a politician are released to the public.

Even though they both expose information that was meant to be private, most of the public is interested in one more than the other all while ignoring that the same thing can happen to them.

Not to mention, the only time  the government gets involved in the discussion of privacy and the lack of, is when some of their documents get leaked to the public by whistleblowers and when they get exposed for the illegal acts that they’ve been doing for years in the name of security.

Before then, it would be wise to do what one desires  as if no one is watching because soon we will have Big Brother looking over us.