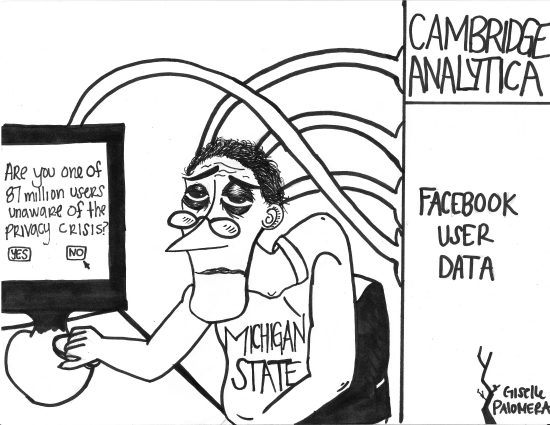 Facebook users should delete profiles, in light of the investigation regarding the privacy crisis that 87 million users are unaware of.

Did someone forget to read the fine print? What do you mean Facebook was not aware of the issue?

These might be some areas of concern for some users.

Those who have used the app, This Is Your Digital Life, are part of the 87 million users whose data has been shared and kept for political research reasons by Cambridge Analytica.

Public profile, page likes, birthday and current city were among the information likely shared and kept by Cambridge Analytica.

According to the Los Angeles Times, Zuckerberg said that he was not aware of the data problem.

“We didn’t take a broad enough view of our responsibility and that was a mistake,” Zuckerberg said to the LA Times.

This scandal with Cambridge Analytica has opened the door for a new investigation with the Federal Trade Commission, on the use of social media platforms to sway presidential elections.

The investigation will focus on whether or not Facebook violated the 2011 consent decree.

The consent decree was put in place to make it mandatory for Facebook to inform its users of privacy changes.

This is only the beginning of what users will know on the current privacy crisis.

Zuckerberg appeared at Capitol Hill last Tuesday to apologize and come to a conclusion, which sets new privacy regulations.

In an interview with USA Today, Zuckerberg admits that trusting Cambridge Analytica to delete or not use the data from Facebook users was a mistake.

All of these apologies from Zuckerberg and his colleagues at Facebook do not account for all of the damages that can rise out of this scandal.

What other third-party servers have and are using our data? Facebook allowed for our information to be used.

This is why there have been targeted advertisements on Google, SIRI, social media platforms and other internet sites.

If users do not delete their profiles, Facebook will never understand the severity of the problem.

It will become another issue that made international news, then just blew over.