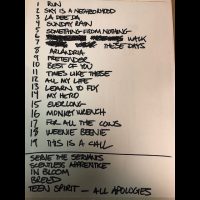 Foo Fighters-curated Cal Jam 18 culminated with a Nirvana reunion and an appearance by Joan Jett in San Bernardino Saturday.

The music festival was a two-day celebration of rock ’n’ roll, featuring both long-established rock legends and a new generation looking to take their place among them.

The legendary grunge band, Nirvana, reunited at Cal Jam 18 after rumors of a reunion at the music festival began circulating on social media.

The rumor of a Nirvana reunion deepened as three former members of the band were set to appear at the festival on Saturday.

Dave Grohl, Foo Fighters frontman, and Pat Smear, Foo Fighters guitarist, are both former members of Nirvana. Krist Novoselic, former Nirvana bassist, was set to appear with his band, Giants in the Trees.

The Foo Fighters chronicled their entire history and discography with Grohl saying, “Tonight we’re going through the years. Going way back.”

Among their many hard-hitting songs, was a stripped back, more emotional rendition of “My Hero.” The crowd erupted as soon as Grohl played the opening riff to “Everlong,” one of Foo Fighters’ most popular songs.

After playing the first song from their first album, “This Is A Call,” and an hour of stage time left, Grohl had gone as far back as he could with the Foo Fighters. They put their instruments down and walked offstage.

Through the stage screens, Grohl was seen backstage with former Nirvana members, Smear and Novoselic.

Grohl then walked out onto the stage once again, this time, sitting behind a drum set, as he used to as Nirvana’s drummer, along with the rest of the surviving members of the band.

This was the second time Nirvana had reunited since the death of Kurt Cobain, Nirvana frontman, in 1994.

Nirvana played a six-song set with John McCauley, of Deer Trick, taking over as vocalist. They played “Serve The Servants,” “Scentless Apprentice” and “In Bloom.”

Halfway through the set, McCauley was replaced with Grohl’s special guest, Joan Jett of Joan Jett and the Blackhearts and The Runaways.

Together, they played “Breed,” “Smells Like Teen Spirit” and ended the festival with “All Apologies.”

Other notable acts performed at the festival as well.

Billy Idol headlined the festival on Friday. Actor Jack Black’s band, Tenacious D performed on one of the festival’s three stages on Saturday along with Garbage, Greta Van Fleet, Black Mountain, The Front Bottoms and many others.

Another highlight of Cal Jam 18 was Iggy Pop with Post Pop Depression, a supergroup consisting of Josh Homme, frontman of  Queens of the Stone Age, Matt Helders, drummer for Arctic Monkeys, Matt Sweeney and Iggy Pop himself.

They performed on the festival’s main stage before Foo Fighters’ headlining set.

At the end of the festival, Grohl assured the crowd that the Foo Fighters would be back next year.