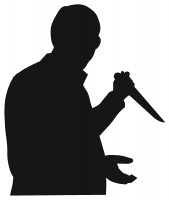 Slasher films are making their way back into the mainstream.

The slasher genre of films are horror films with a primary antagonist going after unsuspecting victims.

Some of the tropes of these types of horror films are brutal and gruesome kills and victims who don’t realize that a killer is after them until the killer gets a few of the victims’ friends.

These films also have what people call a “final girl,” where the main protagonist is not only female but is the only character to survive the killers massacre.

Slasher films never really went away, they just evolved into indie films around the early 2000s.

They had critical success with the audiences that watched them.

Films like 2014s “Creep,” by Patrick Brice, and “The Guest,” by Adam Wingard, both have high scores on Rotten Tomatoes, but because these films were indie  releases, they never got recognition by mainstream audiences.

An example of the resurgence of slasher films with critical and financial success is “Don’t Breathe.”

The film made $157 million in the box office with a $9 million budget and an 88 percent score on Rotten Tomatoes.

The new “Halloween” film had the second biggest box office opening weekend in October and has a critical reception of 79 percent on Rotten Tomatoes.

This reception to the new “Halloween” film shows that slasher films are a genre that audiences are enjoying again.

The reason for this resurgence that these films twist some of the tropes that older slasher films used.

“Happy Death Day” still had all the usual cliches of slashers but the twist was that the final girl dies and then wakes up reliving the same day over again and over again.

For “Halloween,” the twist is that the old final girl, Laurie Strode, played by Jamie Lee Curtis, is not just trying to survive but is actively trying to fight back throughout the film.

This new wave of films have a different take than the slashers that came before, having an interesting idea that intrigues the mainstream audience to go watch them.

Slashers never  changed the formula of the genre when it was in the indie phase of the 2000s.

It wasn’t until 2010 that indie slasher started having unique ideas.

“Hush” has a deaf protagonist woman trying to survive a home invader. The reason this film was not as popular was because this film never had a theatrical run.

“It Follows” was a mainstream film that did well critically but didn’t perform well at the box office, because it didn’t offer anything new  to the slasher film genre.

Much of the credit for the revival of slashers has to go to Blumhouse Productions that mainly produces horror films and many of the innovative horror films.

Since slashers are coming back from the indies into the mainstream, it will only add more variety to horror films.