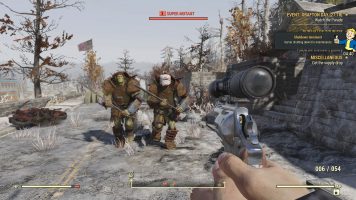 This is the first attempt by the studio to bring their lauded “Fallout” franchise into the multiplayer online world. The beta has brought along mixed results as it pertains to the story and player count common in most multiplayer games.

“Fallout 76’s” story is fairly straightforward at the beginning. Set in West Virginia in the Appalachia area, the game begins after a war destroys most of what makes up the United States. The player is part of a group of survivors who must retake the world that remains by any means necessary.

The player starts out creating their main character using a creation tool set that allows for changes in everything from the size of a character’s nose to the type of hair color. The use of sliders to change size, position and colors makes the creation a simple affair.

After the player is done making their character, players must make their way from a starting room and out of the area known as a “vault.” In “Fallout” lore, vaults are special areas underground that were created very much like fallout shelters during the first part of the Cold War in the real world. In the game, however, the vaults became much more fantastical with robots and advanced technology. These vaults serve their purpose of protecting the people within from what the game has called “total nuclear annihilation.”

Traversing the vault allows players to familiarize themselves with the basic controls of the game. It also helps start out the players first mission and introduces the world and story of “Fallout 76.”

Once venturing outside the confines of the vault, the first thing that is different from previous iterations of the fallout franchise is how green the area looks. Despite the lore saying that most of the world became a wasteland, the area where “Fallout 76” takes place is very green. Forest areas with streams greet the player, but soon the aftermath of the “total nuclear annihilation” is seen. Feral creatures, mutated wildlife and, what can only be described as monsters form what is left of life in Appalachia.

Most of the enemies are takes on either superstitious or old wives tales of monsters from the area. Others are direct takes on existing animals from the real world. Having a three foot long opossum attack the player early in the game can cause some sleepless nights afterward.

After accomplishing a certain number of quests, players get enough experience points to level up their character. The new leveling structure is interesting to say the least. When leveling, players get to add points to six specific sections of their character. It uses the same sections other “Fallout” games have used, strength, perception, endurance, charisma, intelligence, agility and luck, or how the game shortens it, “S.P.E.C.I.A.L.”

“Fallout 76” also adds in the building mechanic that made its debut in “Fallout 4.” The mechanic is used to build the players a camp in any spot in the game world. From there, the players camp can be populated with buildings, defense turrets, and creation benches to build weapons and armor.

“Fallout 76” keeps the sense of dread that many of the other “Fallout” titles have used. Fortunately, it also combines the environmental sense of dread the game creates, with the occasional pop up of another actual live player.

These occasional meetings can be quite interesting, and despite there being only a few live players that populate each gaming world it causes each appearance to be a memorable moment while playing. Players never know if there is going to be a firefight, trading or grouping up to do missions when they meet another player.

“Fallout 76” looks amazing and has classic controls to fall back on. The story focuses on what humanity needs to accomplish to survive the new world players are thrust into. Playing an online version of a game that for so long has been a single player experience may make some of the die hard fans hesitant to try it out.

Yet, playing the beta for “Fallout 76” has shown that the role-playing experiences and the story beats will be as engrossing as the more mainline titles in the blockbuster franchise of “Fallout.”