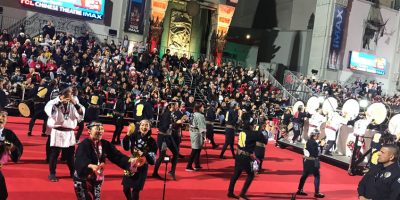 Los Angeles started off the Christmas season by hosting it’s 87th annual Hollywood Christmas parade which followed a 3.2-mile route along Hollywood Boulevard, then back along Sunset Boulevard.

“Hosting the parade is always fun [and] exciting.” Clayton said.

This year was even more special than the last because of the United States Marines.

The gifts were donated by the Marine Toys for Tots Foundation that are given to less fortunate children all over the world.

The parade took place in the heart of Hollywood, closing down every block from a three-mile range down Sunset Boulevard and Sycamore Street.

Gigantic balloons in the shape of ornaments and favorite holiday characters such as the Grinch and the Cat in the Hat sparked the streets.

Ripley’s Believe It or Not, Aquarium of the Pacific, and Knott’s Merry Farm were among the other sponsors. Partnership with Knott’s Merry Farm allowed the attendees to enjoy the appearances of Snoopy, Charlie Brown and Lucy on the red carpet.

Sierra Clair, reporter from Hollywood Glam Magazine, asked Santa Claus what he was most excited for this Christmas.

Santa pointed to the two Marines alongside him and said, “I am most excited to see the smiles on every child’s face when they receive the gifts they deserve, thanks to these wonderful gentlemen.”

General Pete Osman, President and CEO of Marine Toys for Tots, gave both gentlemen a pat on the back.

Popular artists, such as Ashanti and The Band of Merrymakers, strolled through the red carpet.

Performances included the Band of Merrymakers with their new single, “Christmas Everyday,” Tearaways with, “Stuff Your Stocking,” and singer Clare Dunn with “O Holy Night” and her single “Tuxedo.”

The Hollywood Christmas Parade will premiere December 14 at 8 p.m. on the CW Network and on Hallmark after the CW broadcast.