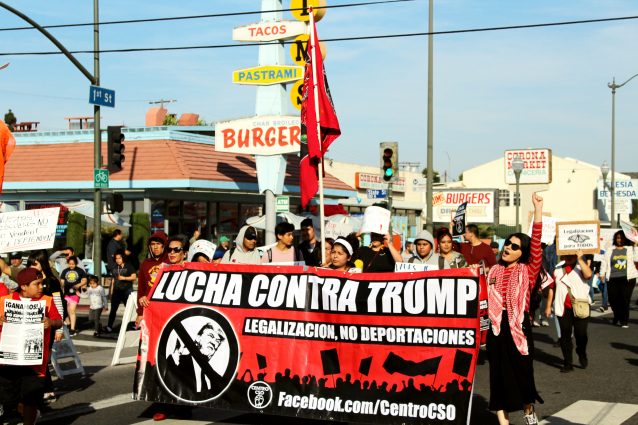 Centro Community Service Organization asked the community of Boyle Heights to join them in the fifth annual May Day March.

Supporters gathered together in the march so that their voices could be heard across the United States.

Chants of protest erupted throughout the entire route as bystanders cheered and honked in support.

The marchers made a stop at the Los Angeles Police Department Hollenbeck Station to protest the police and stop the killings of innocent people.

Mothers like Rosa Moreno, Lisa Vargas and Josefina Huizar, who lost their sons at the hands of police, came out to speak.

The mothers pleaded with police asking to ease off their guns and search for alternative ways to handle their situation.

Lisa Vargas is creating a movement that will provide justice for the families that were affected by police shootings.

“I’m here to put an end to the shooting of the innocent and provide justice and hold the murderous officers accountable for the crimes that they have committed within the community,” Vargas said.

Jose Mendez’s younger sister spoke out against police. “What would you do if your child was killed by cops,” she said.

She was met with cheers and the crowd moved  onto Mariachi Plaza for the final rally stop.

Speakers addressed the issue of charter schools invading the public school and trying to keep education private. Luis Sifuentes, Centro CSO member, talked about how they managed to stop a charter school from being built in Boyle Heights.

Sifuentes said that unionization of the community put a halt to the construction of KIPP Promesa Charter school in Boyle Heights.

“Education should not be privatized. Education is  for anybody that wants to achieve higher education,” Sifuentes said.

The rally also focused on the immigration laws that are being enforced by President Trump.

Eloisa Galindo, of Eastside Parents Against Privatization, spoke out against the Trump administration.

Galindo said these laws have instilled fear into the families of Boyle Heights.

“No ones to live in fear in the United States and as long as we the people stick together and support each we can fight off the opponents,” Galindo said.

The club said more attention should be placed on public school sinstead of separating education privileges.

Along with MECHA, Black Lives Matter Los Angeles came out in full support as well as the citizens of Boyle Heights.