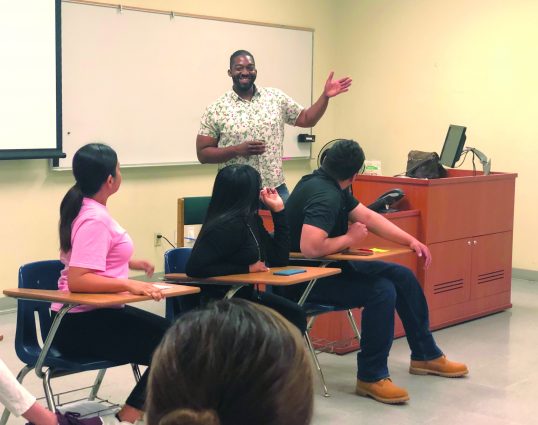 Uniting the community and becoming an ally to black and brown students, Kashif Powell is an instructor, artist and community leader seeking to make a change. Powell has been teaching communication studies at East Los Angeles College since 2016.

Inspired by his students’ work ethic and drive to be better, he organized the Black and Brown Unity Conference in hopes of starting a conversation to breach the gap between these two communities.

Powell said he can relate to many of his students at ELAC  because he sees himself in them. Some of his students have the same economic experience as he did. “Teaching almost myself was a cultural shock,” Powell said.

He shared an anecdote of the police pulling him over while he was driving home from work.

“If I said the wrong thing they could’ve taken my life and I would’ve just been another black guy that was shot by the police.”

The goal of this conference is to create a foundation for social support.

The sense of not being alone and that there are others going through the same struggles. The first conference was last year and featured all black women panelist.

Powell said that the majority of his students are women and it’s important they have that representation on a larger scale.

In the years to comes he hopes the panelist become more diverse.

“I realized the urgent need for us to share more about the issues affecting us and our families. The impactful dialogue among my fellow panelists and the audience was a true testament of the need for community healing,” Kertia Duga, a panelist at the conference, said.

She was inspired with the potential for greatness at the conference. Duga has known Powell for many years.

“I think the most valuable of his character is his kind spirit,” she said. “He cares about his students in a way that illustrates that he has their best interests at heart.”

Powell is the founder of the Art Garden LA, a community garden where plants meet art.His art is created from recycled pieces of furniture. Powell said that his art is inspired by his pain, experiences, based on his academic research of “black death” and the imagination that comes from those feelings.

Art, to him, is an important form of expression that is sometimes easier to depict than to articulate.

Powell grew up in Florida, then moved around while going to school. He attended Morehouse College, an all-black university. Afterward, Powell went to Cal State Long Beach to pursue a masters in communications and his Ph.D in North Carolina also in communications

As an instructor he encourages any student struggling with public speaking to take a communications class. Voicing an opinion and thought is very important you are essentially giving a voice to the voiceless.

Powell is currently working on a book, although he can’t say too much about it yet, he did share that it’s a science fiction novel.

Powell is trying to form a club called “The Black and Brown Student Alliance.” Any student interested can email him at powellkj2@elac.edu.

This club’s main focus will be to help create resources and avenues for students to be connected and to build networks to help them succeed in the future. Also, in the works is a study abroad program to Greece for the summer of 2020.